Yesterday, I had the pleasure of hosting my friend’s baby shower. Months of planning went into this, and though it was incredibly time-consuming and tiring, I had SO much fun planning it!

The theme was “nursery rhymes.” It was a co-ed shower, so that was a little daunting just because there were 50 something people in the final count. I feared we wouldn’t fit in her parents’ house.

Here are pictures of some of the décor, which the mommy-to-be did herself because she’s incredibly gifted like that. She even made a slideshow that looped through the entire shower.

I didn’t take too many pictures of the games. But because there were 50 people, guests were divided into 4 teams: blue, yellow, pink, and green, and each team rotated to play each game. We had Harold and Purple Pictionary, Everybody Poops Diaper game (guess which chocolate bar is in the diaper), Mr. & Mrs. Muffet on the Hot Tuffet (testing the parents-to-be to see how much they know about each other), Baby Bottle Drinking contest (the funniest in my opinion–there’s just something hilarious about watching adults suck beer from baby bottles), and my personal favorite–Who’s Who? (matching baby pictures to adult pictures of guests). This last game was probably the most difficult for people, but it was a pleasure putting it together because I got to see everyone’s adorable baby pictures. It also added to part of the décor.

Most importantly, FOOD! I didn’t get pictures of the main course, but there was sure a lot to eat! Lots of Filipino food, meaning lots of yummy meat. Cornbread, macaroni salad, coleslaw.

Appetizers and dessert were provided by friends and a few catering services. I helped put together food name cards, all named after nursery rhymes/fairy tales. We put the cards into white picture frames to stand on the tables.

Drinks: Goldilocks & the 3 Beers, Cow Over the Moon Coffee and Cream, I’m a Little Teapot of Earl Grey, A is for Apple Juice, Jack and Jill’s Pail of Water. 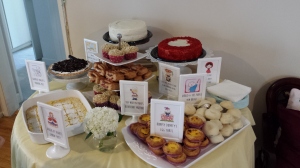 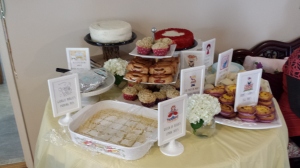 Scrapbook: The cutest idea ever was for guests to take a polaroid shot of themselves, then write a note of their wishes to the baby, which will then be incorporated into a baby scrapbook. Not pictured, but we hung the wishes and pictures with clothespins, similarly to the baby and adult pictures of the Who’s Who game.

We also had a diaper raffle. We had six gift cards as prizes. Each gift card was related to a nursery rhyme. Jack and Jill: REI, 3 Men in a Tub: Bath & Body Works, The Old Woman who Lived in a Shoe: DSW, Old Mother Hubbard (and her bare cupboard): Bevmo, 3 Little Kittens (and their mittens and pie): Marie Callender’s, Hey Diddle Diddle (the cat and the fiddle): iTunes.

Other highlights: using a megaphone to direct people because I have a soft voice (of course then other people wanted to use it), watching people passionately suck on baby bottle nipples (so suggestive…I was entertained), and the biscotti that was given out as party favors, made by the parents to be and the grandma to be. It was delicious!

Now I’m experiencing post baby shower planning depression. Thanks to all the friends who came early to set up and help, and to those who made food and helped with games!