We decide to drive around the island today. First, we head east towards Souris for Basin Head, also known as Singing Sands Beach. The sands are supposed to sing when you walk on them, but I’m disappointed. I barely hear a squeak. But the scenery more than makes up for this. 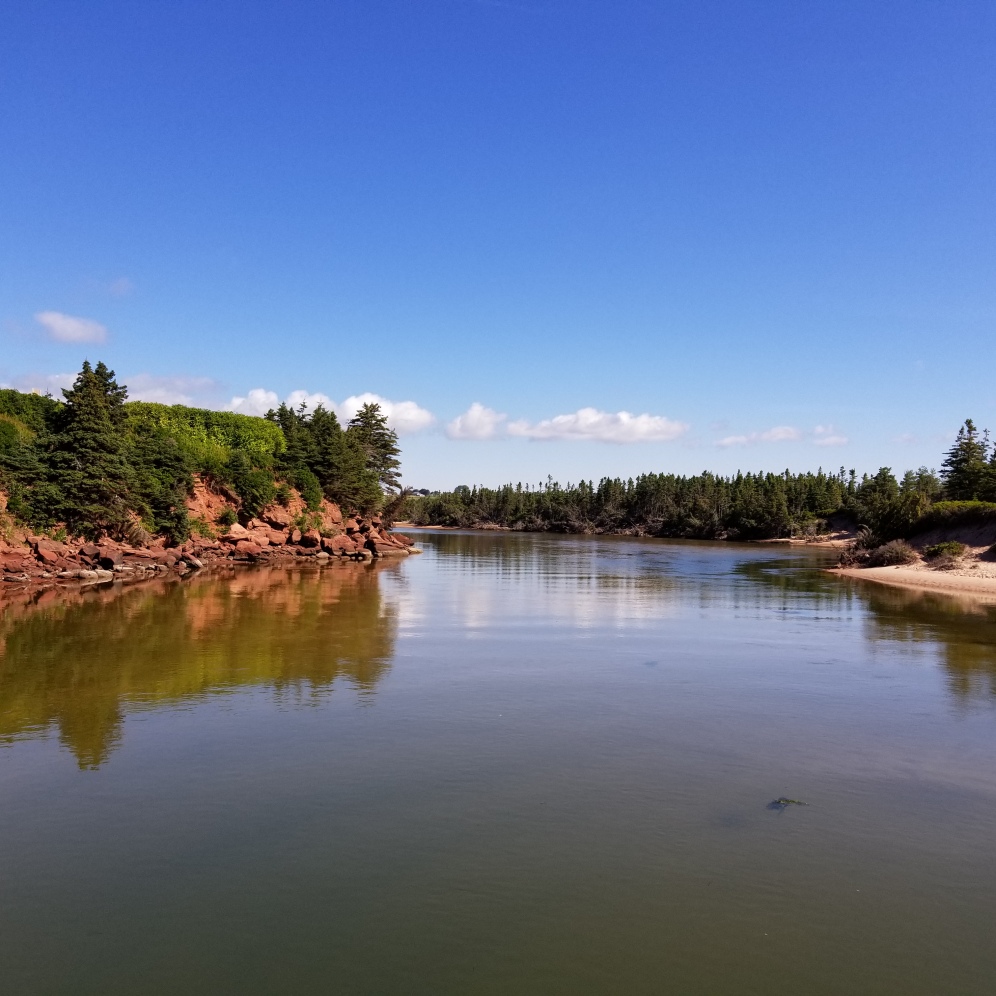 So much beauty on one beach 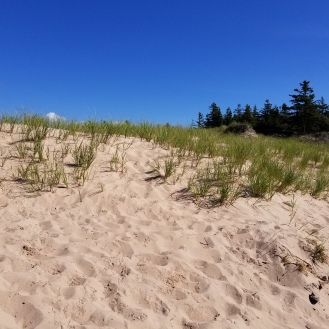 We’re so hungry at this point, so we eat Lobster Mac and Cheese from the only restaurant here. Then we head out and make the three-hour drive to the other side of the island. The North Cape Coastal Drive.

On our way there, my dad calls me to say my grandfather isn’t doing well. The news makes me tear up. I’m supposed to visit him when I return from PEI, but I have a feeling I won’t see him again.

We continue driving and follow the signs until we end up at the West Point Lighthouse. 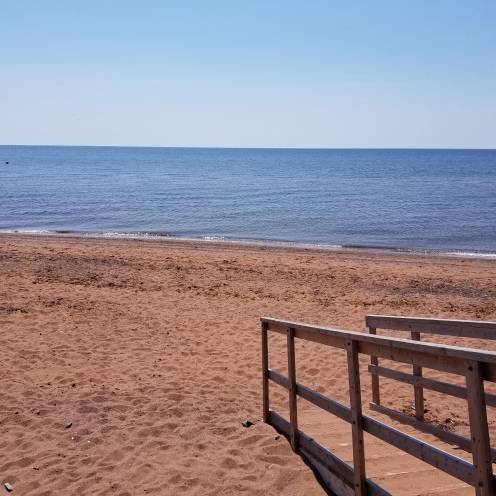 Then we continue on to the North Cape Lighthouse, where we eat a late lunch/early dinner at Wind and Reef Seafood Restaurant. We’re seated at the window. Outside, we can see the lighthouse and the ocean. 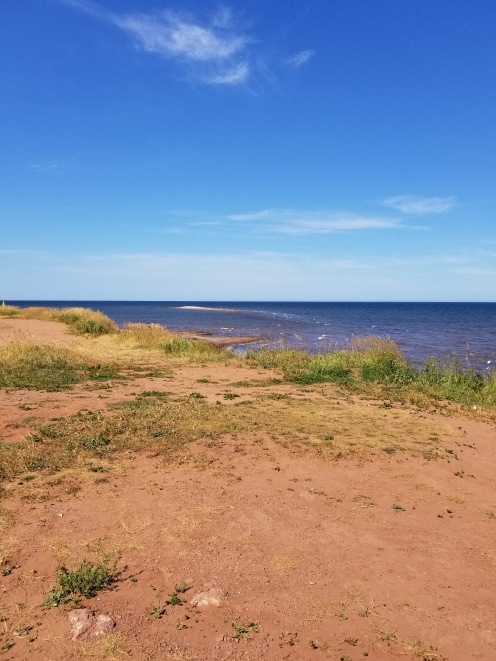 I get a shrimp appetizer, seafood chowder, and a scallop entrée. For dessert, I have the apple blossom, which is an apple tart with ice cream.

The food tastes okay, fresh, but nothing special. We’re really paying for the gorgeous view. The same kind of scenery in LA would have been an arm and a leg in itself. 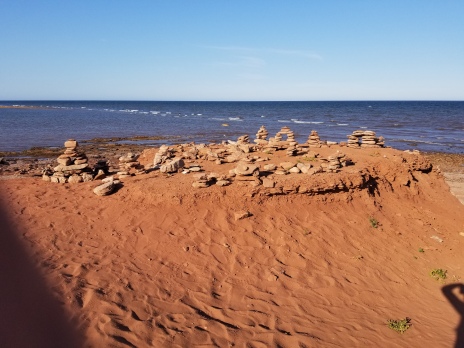 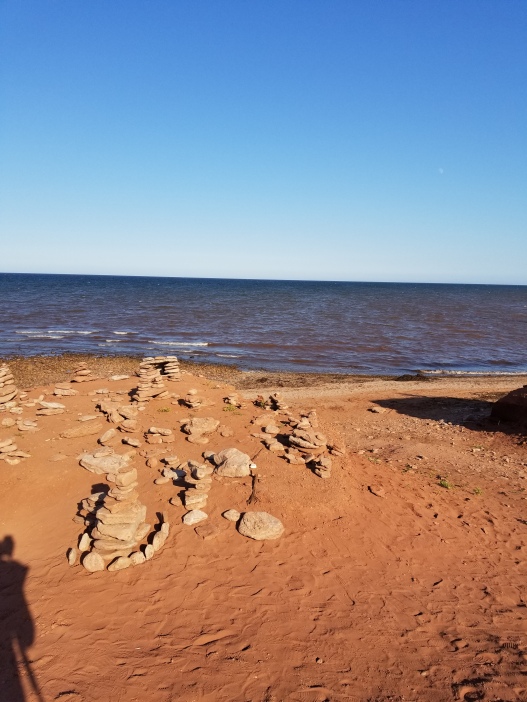 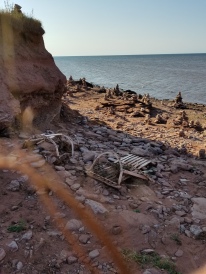 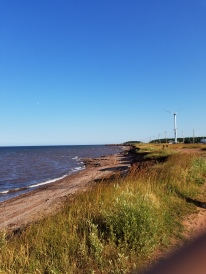 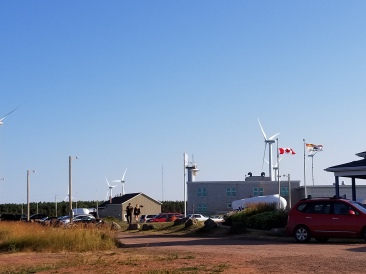 Seeing these lighthouses reminds me of Captain Jim in Anne’s House of Dreams. He is a lighthouse keeper who befriends Anne. He writes his life story, and when he’s finished, he passes away, having accomplished his life’s purpose. I think of my grandfather, and I feel his spirit in the air. Like Captain Jim, perhaps he’s finished his purpose in this world and needs to travel on.

Travel Buddy wants to sleep in, so I go for a run downtown. When I get back, I receive devastating news from home. My grandfather has passed away. I spend the morning trying to compose myself, but then decide to go out and get my mind off the sad news. We take it easy and just do some souvenir shopping. We take pictures with the huge year signs of Canada’s birth year, 1867, and now, 2017. 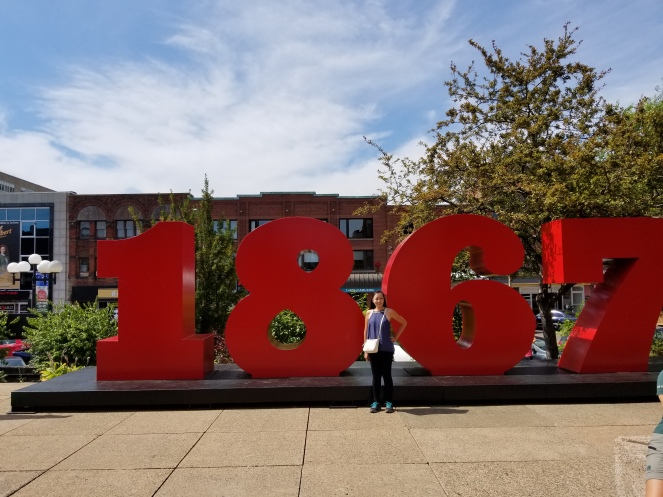 For lunch, we go to Lobster on the Wharf. We order calamari, lobster bisque, and crab cakes.

The calamari is overpriced, and the crab cakes are the worst thing I’ve eaten here. They are far too dense. Too much bread crumbs, not enough crab. I won’t come here again.

Travel Buddy has wanted to try butter tarts this entire time, but we haven’t been able to find them, so I ask the guy I met on the plane. He recommends a local bakery, Buns And Things. Travel Buddy finally gets her butter tarts. She’s so excited, she Facebook Lives as she eats one.

For dinner, we go to The Brickhouse Kitchen and Bar. I am craving Seafood Pasta. There’s a Seafood Medley on the menu in the “Noodles and Things” section, so I order it, only to find that it’s misleading. The Seafood Medley isn’t pasta…it’s part of “and Things.” Though I’m disappointed, it still tastes good, and it’s better to skip on the extra carbs anyway.

The one food item left we have to try is regular poutine. We find it at a small fast food shop by the pier. Travel Buddy Facebook Lives this, too, much to my amusement.

Then it’s time to head back to the Airbnb, check out, and head to the airport. This trip has been life-changing, and I know I’ll be back soon.